If you have never been to Ridgeline Training Center in Dalton NH let me try to describe it to you. You just keep driving up a big mountain on a small NH road… After a few minutes of driving up the mountain, the road gets a little thinner, windier and the incline gets even steeper….you continue to drive up the steep mountain…. Your navigation says 1.5 more miles and you are thinking I am pretty sure I will be at the top of the world soon and getting into the stratosphere. My truck was struggling to get up in dry conditions if the roads were icy NO WAY!

Met Ben and his wife Rachel setting up the line said my hellos and offered a hand in setting up the targets. As the other students arrived and unpacked their gear I said hellos and we informally made our introductions. The other students in the class had all traveled down from NY, a long drive to the mountains of NH, but this class was worth it, Ben has one of the best shotgun classes on the east coast.

Ben Introduced himself thanked everyone for being in class on this cold morning and said we were going to have a ball shooting shotguns. You could see his enthusiasm and his love for his job on his face. “..Don’t worry, things are going to warm up fast once we start shooting the shotties…” Ben said. We went around the group introducing ourselves, our previous training and what we wanted to get out of the class. I had taken this class three or four times over the past few years, I wanted to smooth out my reloads and get my shotgun manipulations honed.

We had our safety briefing, identified medical personnel within the student body. Ben talked us through the range orientation, what to do if there was a training accident and medical services were needed. People were given jobs in the unlikely event something happened. Who to call, the correct words to say and the words do not say to the 911 operator.

We started off with unloaded guns at the 7-yard line, Ben explained the parts the shotgun and the different positions we were going to use on the range. Ben demo’d how to load one directly into the ejection/ loading port both overhanded and underhanded. We practiced with dummy rounds, once we had motions down we loaded up some birdshot and shot steel. My Mossberg seized up! Something was preventing the forearm from moving. It was stuck in the rear position, Ben being the former head armorer at Kimber could not un f*** it after a few minutes of playing with it… No problem I said I brought a backup, I went and retrieved my 870 20 gauge and got back on the line.

We moved back to about 10 yards and practiced loading one shell of birdshot directly into the loading/ejection port and running the forestock chambering the shell and firing on our steel target. We did the overhand and underhand method mutable times until we were comfortable getting that first shell directly into the barrel smoothly. We examined the birdshot patterns from 7-20 yards on the freshly painted steel targets. Birdshot is really not the best for defensive ammo choice for anything further than 5ish yards. We shot a ton of birdshot, single shots, multiple shells, direct loading into the ejection/loading. (FUN!)

We shot from standing, kneeling, rested kneel, double kneeling, sitting, on your side and prone. We learned how to turn safely with the gun and engage the target. Face left, Face right and about-face. Prone is hard. We shot so much that my front sight wandered right off the barrel. I had no front sight and a ghost ring on the rear. At first, I thought oh well it was a shotgun, I really did not need a front sight, but I did! I was missing the steel more than I was hitting it at first. It took me a while to find the correct hold, but once I found it I was ringing steel more than I was missing. Front sights are important on a shotgun too!

All throughout the morning we were constantly being reminded to FED THE MACHINE. Keep topping off - adding more shells in the magazine. “..If you are not shooting, you should be loading Ben would be constantly reminding us…” We seemed to be always shoving shells into the magazine every opportunity we had.

We switched out steel for paper targets and our dump pouches from birdshot to buckshot. We learned that not all buckshot is created equal. Ben showed us how Federal Flight Control 00 (FFC00) really holds super tight even at distance. Our low end 00 had much larger spreads than the FFC00. Amazing load for buckshot. Oh yeah… the BUCK is harder on your body. OWEE! We pattern our buckshot from 5 yards to 20 yards from all positions, Standing, kneeling, and sitting. Thankfully not from prone.

We broke for lunch Ben hung out chatting with students during the lunch break. Very personable and approachable. After lunch, we loaded up with slugs. AHHH YES! Love those huge bullets. Heavy recoil! BIG BIG FUN! We shot slugs at various distances. I was missing not as accurate at distance without a front sight so Ben let me use one of his 870’s. I was much more accurate with both a front and rear sight. I was pleasantly surprised that I was making most headshots at 25 yards.

Our last drill with slugs was a 100-yard streel target up on the mountain from our range, we took turns each shooting five slugs. I made my last one out of the five and I was happy to hear that steel ring. Tough shot up a mountain with a different gun than I was used to.

We learned how to safely move forward, backward, up and down to knees, sitting and back up to our feet with a loaded gun and shot on the move while paying attention to the other shooters on the line while at the same time feeding the beast with shells. Man, that shatter gun gets heavy as your moving and port loading a lot.

The drill that stands out in my memory was the last man standing drill: first-person would fire 5 shots, the next person would then fire 5 rounds. Down the line, until the last person fired. Person number one would have to have the gun loaded and fire his 5 rounds. If your gun was not fully loaded by your next time up, you were out. I was the only one to have a pump so it was back to my turn was super-fast. After round number two I was out. The other students were too fast and skilled for my slow-ass reloads. We did one-handed shooting while the support hand was digging for shells. Tough to keep that shotgun up straight with one hand at the end of the day.

We cleaned up the range and sat down for a debrief. We were sore, tired but all happy faces…. We went around the group finding out what people liked, learned and did not like about the class. We all seem to have LOVED the class and no one had a bad thing to say about anything except the morning cold weather….Mother Nature in the mountains of NH can be a bitch!

We had a range of abilities and I was in the middle of the group. All the guys were super cool and safe all day long. Ben never had to stop the line for being unsafe.

This was a fun class. I love Ben’s teaching style. I had taken this class before, and it seemed to be completely different and new skills to be learned. We did a few of the same fundamental drills in the morning but the afternoon was all different from the previous shotgun classes I have taken with Ben.

I really liked Ben. He is super knowledgeable, skillful, funny, humble and sometimes appropriately inappropriate. As the day goes on his jokes go downhill. He is a down to earth dude, that is easy to talk to fun to be around. Ben cares about his students and he takes the individual time to adjust us when we need an adjustment. Ben walked the line and gave everyone personalized attention and modification where needed. [I have taken classes where the instructor yells at you and sometimes humiliates you in front of the class if you are not doing something exactly correct. Ben is not one of those instructors. If you need to be adjusted or corrected he does it respectfully and treats you like a human being. NOT ALL INSTRUCTORS are like this.]

I think Ben DeWalt and OnSight Firearms Training is one of the best training companies and best-kept secret within the training community. Absolutely take his class if you have the opportunity. 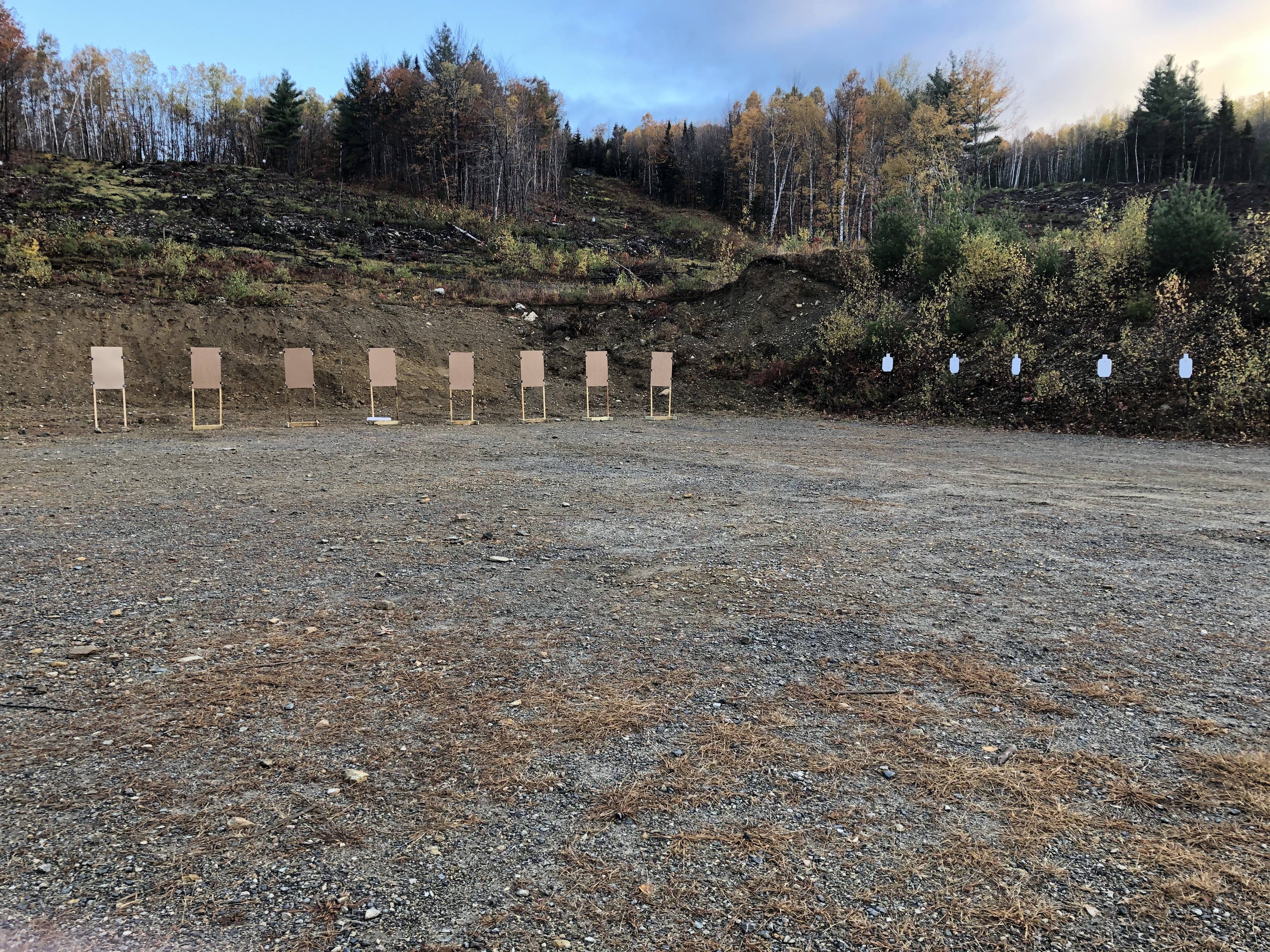