KMM696 said:
I would say you're ok, but I'm not an EPO. Thermal has nothing resembling an artificial light unless the display on the eyeball end is interpreted as one, 9mm fits inside ' chambered not larger than .38 caliber ' I think. My solution is a Contender pistol in 22 TCM with a 2-7 pistol scope. Illuminated reticle, as well - if EPOs think thermal is artificial light than I should be screwed, too.

I'm not as confident that an EPO wouldn't write the ticket - sometimes the process is the punishment. Depends on the officer.
Click to expand...

yeah that was my point. as there is no such thing as a cartridge chambered for a caliber. the law essentially makes 0 sense... they are going to be reluctant to write up anything close IMO after talking to a handful about it. now if you shooting something obnoxious, well then that's on you i suppose, but i'd bet there is a lot of leeway w/ pistols calibers and night hunting.

I had to look up the TCM....cool and all...but what's the advantage? Looks like 38 super carries significantly more energy out of a 5" pistol?

Where does one get this info?

One of those XP-100 deals with a pic rail, could extend my working distance.

BrianWilson said:
I had to look up the TCM....cool and all...but what's the advantage? Looks like 38 super carries significantly more energy out of a 5" pistol?
Click to expand...

Made from 223 brass, which I will never run out of. Factory TCM brass is not that great. Works at 223 pressures in a Contender, not sure what pressures Armscor is loading to for normal pistol use. Out of a 13" Contender, no appreciable recoil making it a fun range toy at 100 or 200. That's also because MGM makes really nice barrels for the Contender. Runs 45 to 55 grainers at 2400-2500, Lil Gun is a hell of a powder, and my favorite so far.

Huge selection of medium to small game bullets in 223, and appropriate powders, and multiple choices in brass. I'm nowhere near figuring out what it likes best yet. That said, there is virtually no factory load data out there and isn't likely to be unless SAAMI adds it to the list. QuickLOAD and anecdotal load data is really all there is.

Certainly not a cartridge that everyone is going to have fun with. I got into it after a conversation with an EPO out my way, who maintained that chambered no larger than 38 caliber meant no larger than the 38 special in a pistol. While driving home, I started thinking about what an ideal night coyote pistol cartridge would be based on his interpretation of the regs. The simple answer was running 38 specials in the 357 Mag Contender barrel I already owned, loaded to the pressures the Contender was capable of instead of catering to all those revolvers in 38 made since 1895. Not the technically ideal coyote cartridge because of bullet selection in 38 (but certainly would have been effective anyway), so I started looking at wildcats. Rimmed cases are easiest in a Contender, so what I was picturing was a 38 special necked down to 223. At some point while looking for that, I stumbled across the 22 TCM, which had advantages because of being commercially produced like dies that were already in catalogs. Ordered the barrel from MGM, and have been playing with it on and off ever since.

Summing up, not a good cartridge if the only part that interests you is the shoot the coyote part at the end. There are much better choices for that. But if seemingly endless load development possibilities (with no industry safety net) sounds like a good time by itself, it's an excellent cartridge and easier to get into than most true wildcats. I suppose the next step for mine is deciding to spend on thermal for it.

Coyote33 said:
Where does one get this info?
Click to expand... 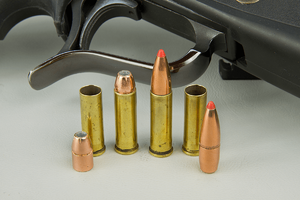 Location
Northwest Assachusetts where the dragons be

I have been talking with a big time coyote hunter lately after he posted a pic of a fixed mag, 6.8SPC for night hunting. He has had run ins with EPOs. They have had a notification that the law does NOT say 38 special, but 38 caliber. He has not had his firearm nor hunting license confiscated. So an AR pistol less than 38 caliber flies.

hv55maxx said:
I have been talking with a big time coyote hunter lately after he posted a pic of a fixed mag, 6.8SPC for night hunting. He has had run ins with EPOs. They have had a notification that the law does NOT say 38 special, but 38 caliber. He has not had his firearm nor hunting license confiscated. So an AR pistol less than 38 caliber flies.
Click to expand...

Yes - even at the time, I was pretty sure the EPO who told me 38 special was the limit was talking out of his ass. It did start me down the 22 TCM rabbit hole, though - which I appreciate.

I left some for youse guys

pupchow said:
I left some for youse guys

Thanks!
I grabbed two boxes as maybe my last TS order before it expires.

pupchow said:
I left some for youse guys

Let me know if you ever see it in 2 3/4, as that is what my shotgun takes. Can't find it anywhere.

I would consider patterning some of this:

We have improved the already-stellar performance of our Deadlier at Distance™ tungsten-based waterfowl load to give you the secret weapon on your next hunt. HEVI-X® is now HEAVIER THAN BISMUTH™. Compared to steel shotshells with the same shot size, HEVI-X® gives you 50-70% more knockdown power...

Hevi-X is available in 2-3/4 BB load with tungsten shot.

Friday at 7:08 PM
bostonelli
B

G
Moving to Massachusetts, running my plan/understanding by members here
2 3