Even before I was interested in firearms I was interested in knives, and I don't have the skills or tools needed to make an an from a shovel a LA Boris, so I figured I'd give making a knife out of a file a try.
After some research I learned that Nicholson files are the best choice for this task, so off to a flea market and I found a handful of old Nicholson files for $5. I annealed them in our fire pit, drew up a pattern I liked and got busy with a hacksaw. It cut much easier than I had anticipated. The longest part was putting a profile on the blade with files. It would have been much easier to use my belt sander but I wanted to go primitive on this project, future ones might be done with power tools. Once I had the blade profile I wanted and the edge about half way finished I lit my charcoal chimney starter and stuck the knife blank in it, let it get cherry red and pulled it out with tongs and quenched it with oil. Once cool it was tempered in the toaster oven at 400 degrees for an hour, cooled off and then another hour at 400. Me and paracord don't mix so I had my girl do a wrap on the handle for me and when the handle was done I finished the edge. It came out good for my first attempt, I'm happy with the results. It is going to be a gift to my father for fathers day. 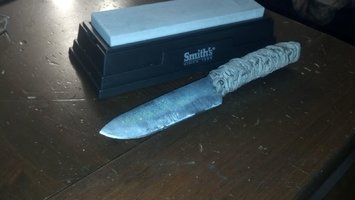 My Homemade Compost Bin I made.