design said:
House vote on Senate amended version could be this week. Call you reps
Click to expand...

Yo: yourself. This is bad.

Myself: noted, will vote accordingly.

and judging from their latest email GOA is fully onboard with restricting the use of firearms.

Unlike last year with SB141, I'm fully behind NHFC's rejection of HB307 as amended by the Senate. GOA is wrong here.

ETA: from those not on FB. 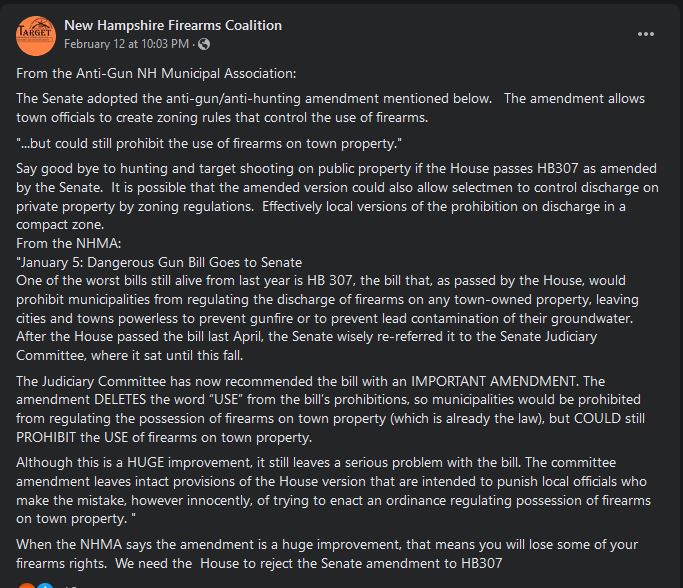 NHFC just sent out an alert on this:
This week in the House there are two bills that House committees recommended correctly:

HB 1310, prohibiting the discharge of a firearm in the direction of a building, livestock, or pets. INEXPEDIENT TO LEGISLATE. (A bill that was unnecessary and negatively impacted the rights of gun owners was recommended to be killed)

HB 1052, relative to the number of rounds of ammunition allowed for hunting regardless of firearm capacity. OUGHT TO PASS. (Minor change that is a small net positive change regarding hunting)

There is one Senate message that we need to pay attention to: This year a bill (HB307) was filed to ensure that public officials were finally held accountable for breaking the law when it comes to infringing on the rights of gun owners.

For years, the gun owners have had to be hyper-vigilant to make sure local officials did not create local ordinances that restricted our rights to use a firearm on private or public property. Although we had in statute a prohibition that prevented this type of behavior from selectmen and other officials; local officials routinely went ahead and did this anyway.

Imagine what would happen if a small group of local officials who hated hunting were suddenly elected and that favorite hunting spot in the local town forest just became a ‘no-hunting’ zone. Or what about finding out that one of the local landowners who had a large parcel of land was suddenly prohibited from using a home range that they had built years ago.

Don’t think this could happen, well it does: Just a few weeks ago in the town of Washington, a group tried to ban outdoor ‘commercial’ shooting via a warrant article. The good news is the current RSA 159:26 prohibited this from happening and once the selectmen were made aware of the prohibition, the warrant article was withdrawn.

Now fast forward to this year, where the bill that we hoped would penalize this type of mis-behavior was gutted by the NH Senate and if passed into law, this bill would actually take away the protections we currently have, instead of expanding them as we expected.

The following has been law for almost 20 years:

We have bolded the critical sentence and underlined two sections of importance. First local officials are prohibited from regulating “use”. “Use” includes things like shooting on private land, hunting on town or state owned properties and even hunting along things like the power lines. Second, “or any other matter” was already in law. Now they want to take out “use” and relay on just ‘any other matter’ as the only protection.

Some of the Senators are claiming that they are protecting the rights of the citizens by making these changes. Nothing could be further from the truth. What they did was remove the one word that is at the forefront of the discussion.

One should note that on the same day that the NH Senate killed two good gun bills that were passed by the House last year (HB196, HB197) they also gutted HB 307.

During the Senate Debate on the floor, the Chair of the Justice committee made the following two remarks in reference to this bill: "Municipalities can regulate the use of that gun" and "You can have it, but you can't use it".

Here is the text of what the Senate adopted

Gone is the most critical word in this sentence: ‘USE’. While it is important to possess, if you cannot practice, possession is nothing more than a hobby of collecting carefully machined pieces of metal.

Local selectmen do not have the power to tax firearms, and that would never fly if they tried to do that. Instead, what they attempt to do is to regulate the USE of firearms. They try to regulate when and where they can be used. They attempt to ban shooting ranges and to ban hunting. We cannot allow this!

This upcoming House session, we have the chance to correct this. Either we give up rights that we have had for years and adopt the Senate version of the bill, or we ask for a committee of conference and push to get the necessary word “USE” put back into the bill.

NHFC is requesting that you correct the bill and not let this go forward without the word “use”. There are potentially other issues with HB307 that might end up in a court battle if this does become law. For example the Governor is not allowed under the NH Constitution to do what the bill requires. The Governor cannot just fire the local town employee or official.

All of these issues can be worked out in a committee of conference, so please ask your State Rep to vote to “Non-Concur and ask for a Committee of Conference”. As always, when you contact your State Representatives, by courteous and limit phone calls to before 9pm.

More flaws in HB307... This is one section where we should not allow local authority
159:29 Exceptions. This subdivision shall not:
..
IV. Limit the authority of the legislative body of any city or town pursuant to RSA 644:13.

What is RSA 644:13? That is the prohibition on discharge in compact zones. Therfore, local municipalities would be free to do what they want under 'compact zones'... Do we really want this?

Section 644:13 Unauthorized Use of Firearms.

So I guess HB 307 didn't get heard yesterday or today?

AFAR/PFAR said:
So I guess HB 307 didn't get heard yesterday or today?
Click to expand...

No, it comes to the House after the Senate "transmits" their message, meaning how they voted on January 5, including amendments.

It will come to the House floor, and the motion will be to accept it as sent from the Senate, or to send it to a Committee of Conference to resolve differences.

The report of the CoC will then be either accepted or rejected by both bodies, separately.

Yeah, I kind of figured a month and a half would be good enough to get it on the floor.

I do suppose it is more important to chew through this year's bills first especially since they may need to go through another committee and another vote.


In regard to HB 307, there are individuals arguing that the removal of the word "use" will not permit local governments to pass anti-shooting and anti-hunting ordinances. This is complete bullshit. Allow me to explain:
Proponents of HB 307, unwilling to cut their losses, are arguing that the removal of the word "use" is okay because the statute goes on to include "other matters pertaining to firearms." Being someone who argues statutory interpretation in front of the New Hampshire Supreme Court, I can tell you this is completely wrong.
There is a longstanding body of New Hampshire law that essentially states that when the legislature decides to strike a word or exclude a word from a statute, that is considered an intentional act with meaning. If this bill passes, how do I answer this question, which will surely be asked by the court: "If the use of firearms was meant to be included under RSA 159:26, why did the legislature remove the word "use" from the statute?"
Anyone who is especially nerdy should look at the following case examples: Fortin Properties v. Town of Hudson, 148 N.H. 769, 771, 813 A.2d 523 (2002); Silva v. Botsch, 120 N.H. 600, 602, 420 A.2d 301 (1980); State v. Simone, 151 N.H. 328, 330, 856 A.2d 17, 20 (2004). State v. Mayo, 167 N.H. 443, 452 (2015)

That needs to be spread far and wide. Especially to the GOA fan club who takes their words as gospel.

HB1178 just passed the House. Hopefully the Senate doesn't screw it up this year.

Title: prohibiting the state from enforcing any federal statute, regulation, or Presidential Executive Order that restricts or regulates the right of the people to keep and bear arms.

and yes, I'm lame enough to be listening to parts of the sessions. Will listen to part of it tomorrow and will unfortunately miss Thursday.

So what next for HB440? Is the amendment adequate that was accepted on voice count? I still don’t see any limitation on the time period for the “suspension” but maybe I missed it.

Looks like we ought to be following HB1268 as well. Hopefully the senate won’t ruin it.

HB 307, relative to the state preemption of the regulation of firearms and ammunition. (House Non-concurs, and Req CofC 5/5/22)
from:

AFAR/PFAR said:
HB1178 just passed the House. Hopefully the Senate doesn't screw it up this year.

Title: prohibiting the state from enforcing any federal statute, regulation, or Presidential Executive Order that restricts or regulates the right of the people to keep and bear arms.

and yes, I'm lame enough to be listening to parts of the sessions. Will listen to part of it tomorrow and will unfortunately miss Thursday.
Click to expand...

The senate screwed it up with an amendment basically permitting the state to collaborate.....even included pre crime language

jpk said:
The senate screwed it up with an amendment basically permitting the state to collaborate.....even included pre crime language

HB 307, relative to the state preemption of the regulation of firearms and ammunition. (House Non-concurs, and Req CofC 5/5/22)
from:

R
Feinstein's Bill and other bills you need to read!!

NH: Critical gun bill hearings over the next two weeks.

House bill to be introduced