I have to say I am drooling. If there is a group buy, I’m in for 4 maybe 5. Replacing all my RMRs with a SRO.

Let me know if/when you want to get rid of an RMR or two.

According to the salesman in the vid, the RMR is more rugged. Why pay 100 more for something that's more likely to shit the bed?
J

frenchman said:
According to the salesman in the vid, the RMR is more rugged. Why pay 100 more for something that's more likely to shit the bed?
Click to expand...

Because its a new shiny toy with a bigger screen that caters to the iphone 10/galaxy crowd.......

frenchman said:
According to the salesman in the vid, the RMR is more rugged. Why pay 100 more for something that's more likely to shit the bed?
Click to expand...

Bigger screen makes it easier to track the dot during recoil. If it can hold up to a lot of rounds, it will sell well in the competition market

A few places on line already have them at $490.00 pre order prices.
I'm in for a 5 moa as soon as they are available. I just need the CZ custom shop to get their
RMR plates back in stock so I can throw one of these on my Shadow 2

If any one gets one of these, I,d be interested in a review

Still waiting...I hope the RDS cut the CZ custom shop did on my Shadow 2 slide will work with this Optic.

anyone get one of these yet?

I hear its not for duty use

Trijicon designed and marketed this one towards competition because the RMR has a way too high failure rate in the competition world. Let me explain. Competition shooters, serious ones, are usually very high volume shooters, measured in 10s of thousands of rounds per season. Those at the top of their game will easily surpass 10k in some months of their season. When "carry optics" became a division, it required a slide mounted optic. 10 thousand cycles on a pistol slide is hell on an optic's electronics. The RMR (along with all other optics) in a high volume setting will fail internally, zero will shift and or the dot will flicker on/off due to either battery contact failure or circuit board failure. The RMR type2 was supposed to address those failures, but by this time competition shooters had better options that also offered larger windows. I know that one of the top CO shooters has two guns in practice rotation, and the 'match' gun gets a new optic at a recorded interval of 5k rounds.

On the other hand, as far as raggedness / durability in a tactical setting, things like dropping the gun, banging it around in a duty holster, the shape of the RMR aluminum housing protected the glass and electronics well and there is rarely a failure from those tings. Here is where the SRO, while having a larger window, does not off the same protection.

A bit off topic... anyone know of any shops, other than BP and Cabelas, that have rmr's ( or Burris, vortex ) in stock? I don't mind traveling a bit either.

kope said:
A bit off topic... anyone know of any shops, other than BP and Cabelas, that have rmr's ( or Burris, vortex ) in stock? I don't mind traveling a bit either.
Click to expand...

Shooters Outpost in Hooksett, NH has a very nice selection of several different brands, and their Firearms Museum is worth the trip all by itself.

My SRO will be here on Friday.
I'll post up some pics and thoughts vs the Vortex Venom and JPoint/shield mini sights I've been using so far for optics early next week
for anyone that may be interested.

If this thing lives up to expectations I'll be replacing the Jpoint on my M&P and the Venom on my Ruger mark III competition as well.
My wife is going to shit LOL when is she sees my CC statement
Last edited: Jul 31, 2019 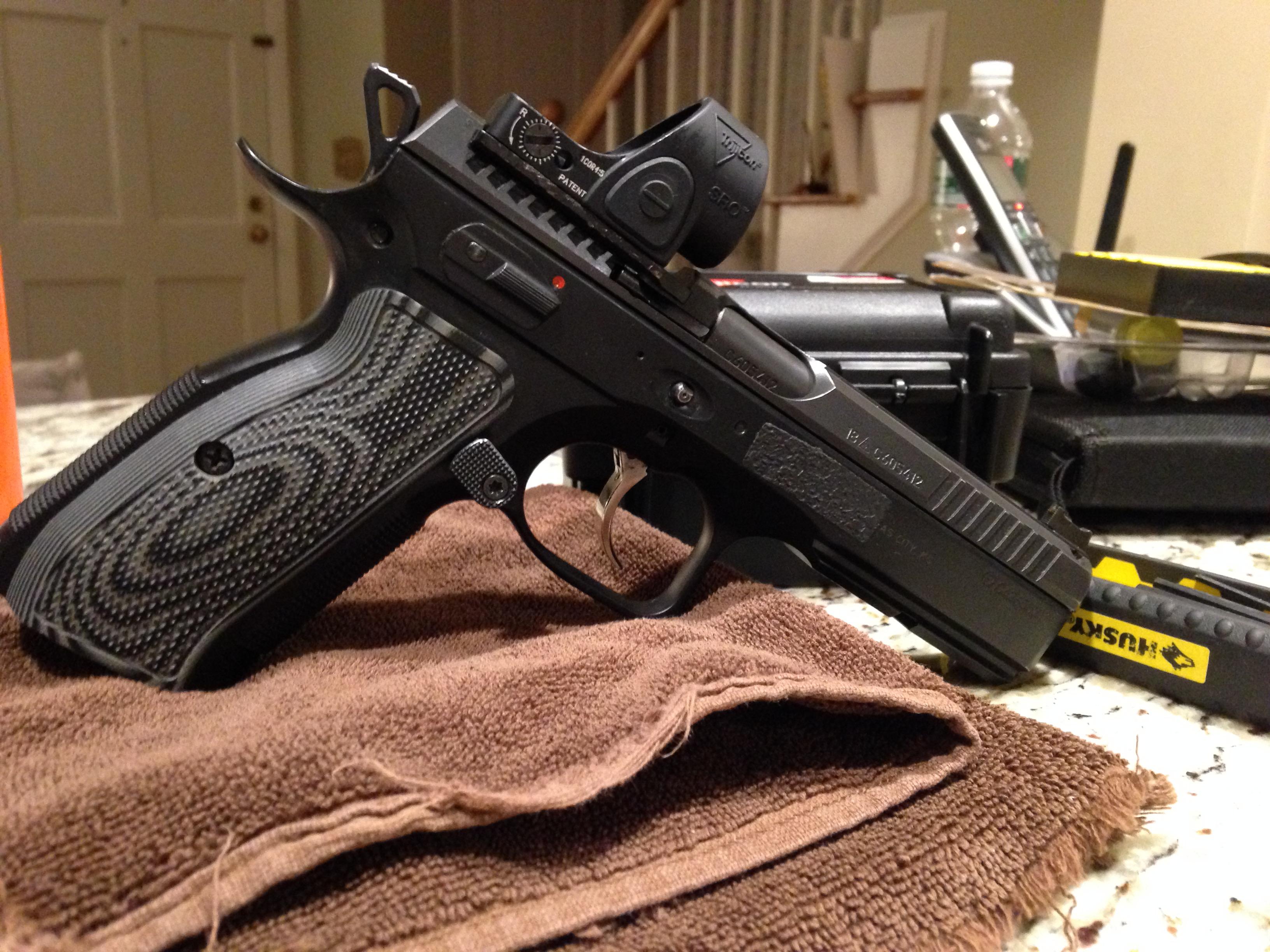 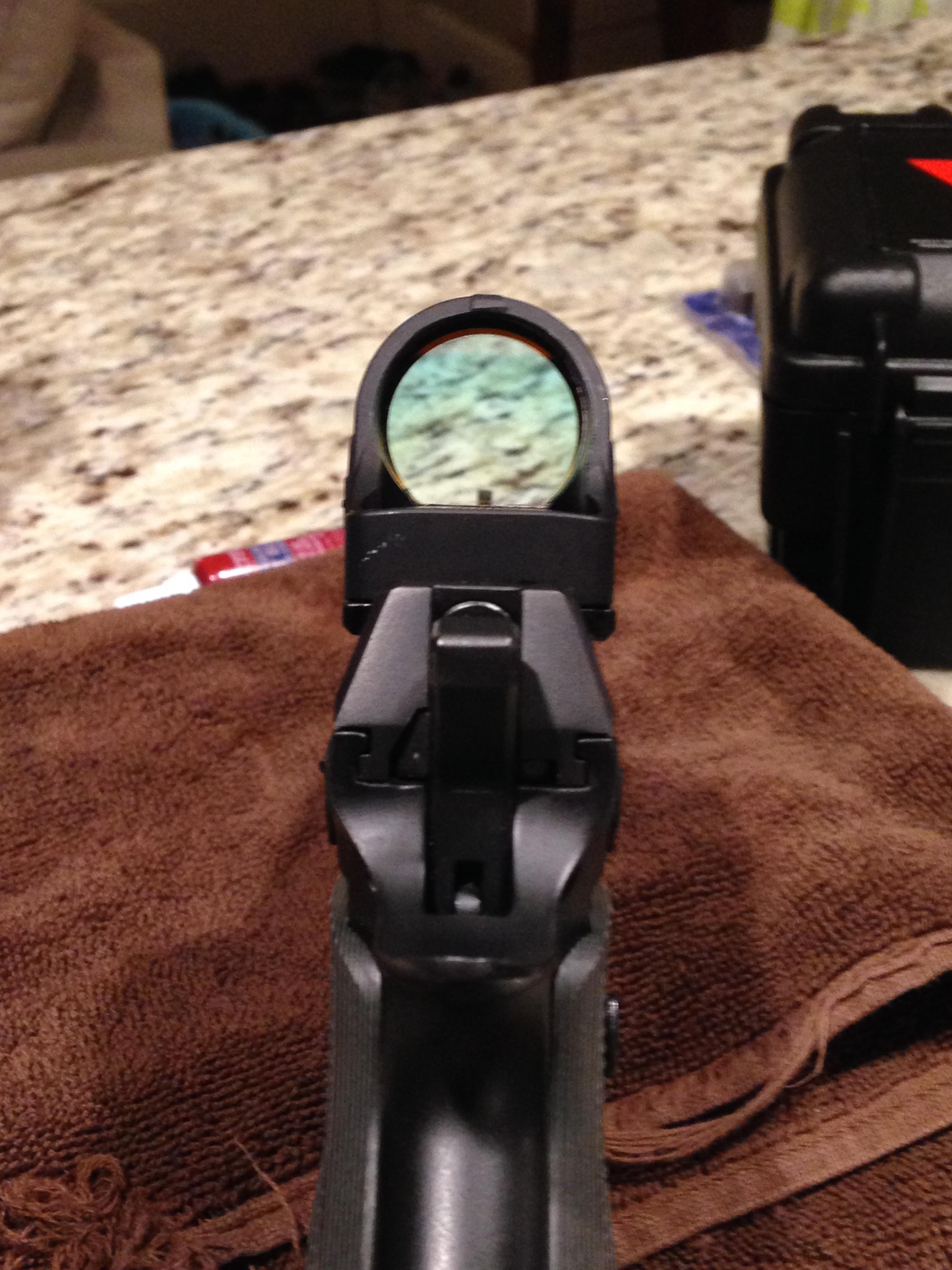 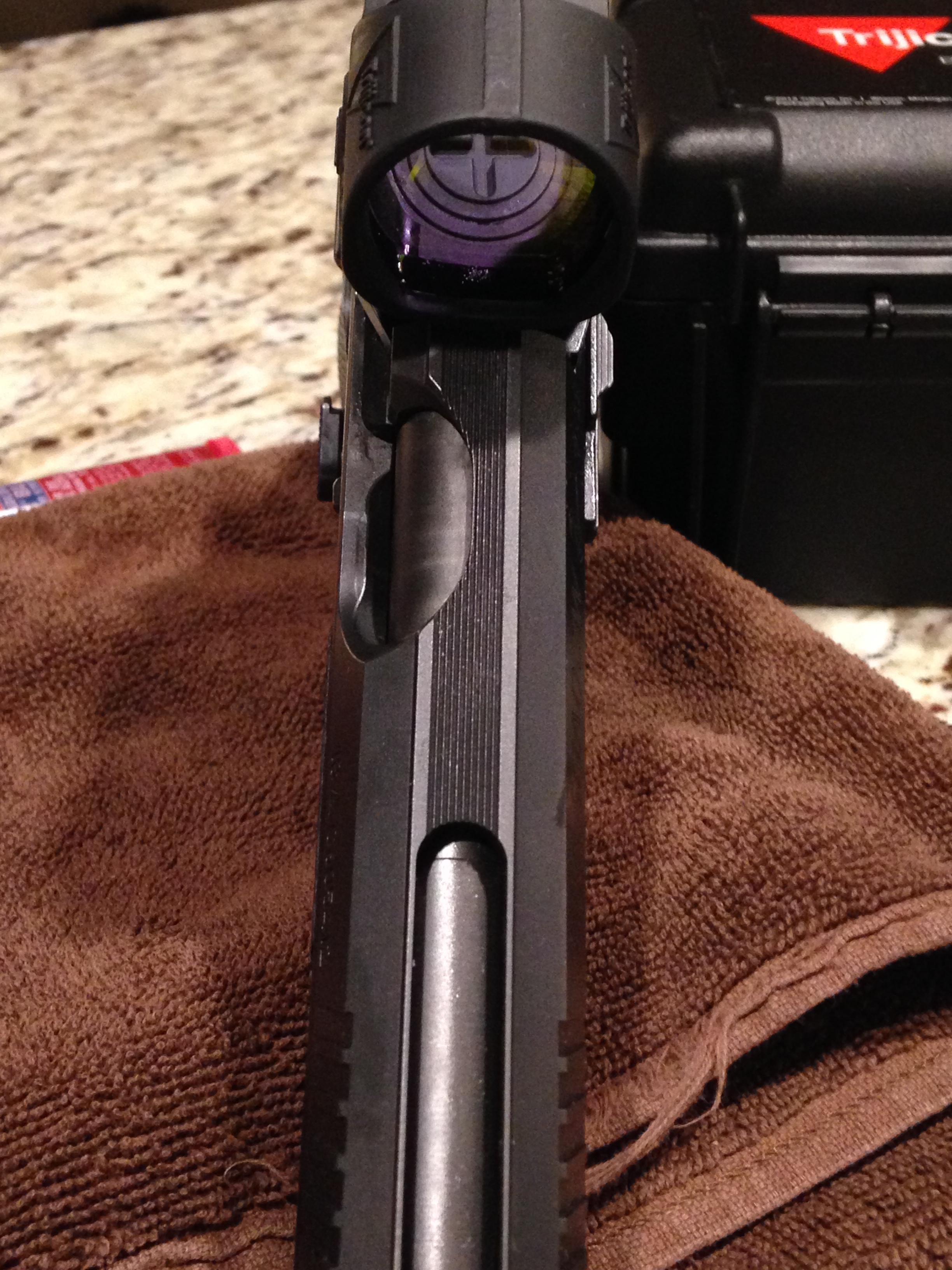 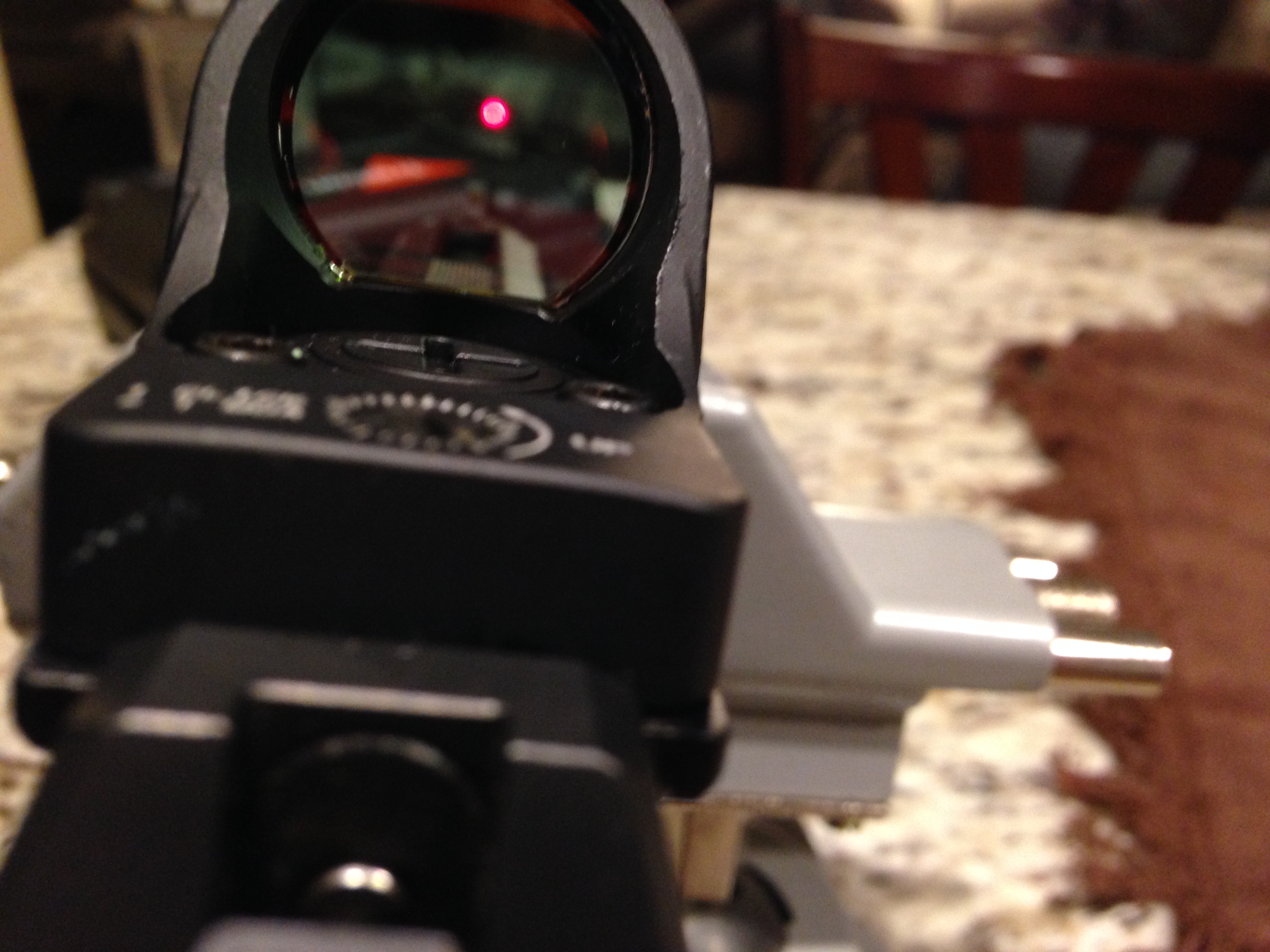 That looks great. I’m between an RMR, SRO, and DPP right now and have pushed myself into the “analysis paralysis” stage.

I’d be interested in seeing how easy it is to zero.

citoriguy said:
That looks great. I’m between an RMR, SRO, and DPP right now and have pushed myself into the “analysis paralysis” stage.

will be at Holbrook around 5:00 zeroing it in and then doing some Blake drills

Took all of 10 minutes to zero this thing in. Pretty close right out of the box.
the 2 little groups off to the side were actually done on purpose shot by a friend who was with me.
We did some double tap drills outside after, transitions were a breeze with this thing.
My buddy who is anti optic was actually intrigued by it. 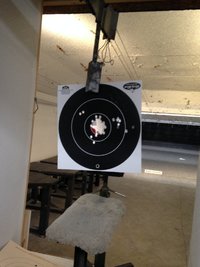 shot another 200 rounds tonight with this thing. Dot acquisition is a bit easier but working on consistent presentation
is what's key on finding the dot off the draw, not the size of the window. I did some weak/strong hand shooting today as well, finding
the dot weak hand was a bit easier with this than the Venom, but is it a total game changer? Committee is still out on that.
I love the bigger window and it does make transitions a bit easier. We'll be running some timed drills and steel plate stages this Friday,
that should prove telling. Windage/Elevation screws have not moved (350 rounds so far) like one guys early 2.5 moas SRO did on Enos forum.
I marked both screws and I'm keeping an eye on them. will probably shoot another 200 rounds on Friday and again on Saturday, I'll recheck then
the sight line on this optic is a touch higher than the Venom, so I'll do some dry fire drawing at home tomorrow for 1/2 hour or so and see if my dot acquisition speeds up off the draw.

That is f***ing massive.

DarthRevan said:
That is f***ing massive.
Click to expand...

I think it's about the same size as a CMore RTS2, it doesn't look massive while I'm shooting , it just looks "right"
like "this is what an optic should look like on a competition gun" the brightness settings are quite drastic and at lower setting it mays the dot actually look smaller
as well as dimmer, I turned it down quite a bit today before I wrapped up and shot some steel at about 85 feet. and it didn't dominate the target at all.
At the brightest setting the dot looks bigger than 5MOA and it's really bright.
I use this for steel and USPSA and I may have been ok with the 2.5. I have an M&P 9L that has a shield Mini sight on it now.
I'd like to throw one of these SRO's on that as well, but I'd like to compare the 2.5 to the 5MOA before I drop any more $$$$ (and my wife kills me)

up to almost 1000 rounds with this optic , zero issues so far.
Adjustments haven't budged and the dot is nice and crisp ....and freaking bright at higher settings.
I'm going to put another couple of hundred through it and then it's Walls of Steel on Friday.
Stock battery looks to have lots of life left.
So far so good

How many hours do you guess you have putting 1k rounds through it? I’m seriously looking into this sight and the RMR.

probably around 15, the window is much larger than an RMR, the dots are equally as bright.
Application? for CCW I'd go RMR , for competition definitely SRO 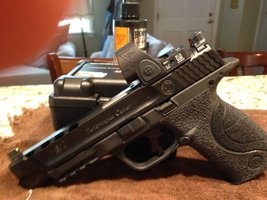 My P320 X5 Legion likes the SRO so far. Just a few hundred rounds through it so far but it's great! 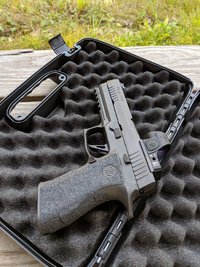 over 3000 rounds through the CZ with this on it and , nothing has moved. Still holding perfect zero.
About 1500 on the M&P nd again no issues.
I'd like to check out the Rig Romeo XL or Max vs the SRO. the $$$ is up a bit for the Sigs optics but they look nice as well.

which red dot to choose for uspsa carry optics?