Now is your chance to live out your Terminator and Jurassic Park fantasies. Bound through the woods saying "Clever Girl!" as you hunt woods tigers or go trap shooting and be "the dude" on the line.

This is an early original FIE stamped receiver, before they went bankrupt due to changing laws. Made in 1982 (third year production) and in awesome shape, just minor normal scuff marks from the steel folding stock. Only shot two occasions by me and it worked flawlessly in both semi and pump modes.

This SPAS has the original and unmolested safety lever, the real OG as far as SPAS 12 shotguns go. This baby has been grandfathered in by date code AI at the front of the receiver where it meets the barrel underneath. Only 1500-ish shotguns were ever imported so these are fairly rare.

I am a NH resident, will sell to any other NH resident or ship it to your dealer.

Asking 4250 OBO. Message me if you have any questions! 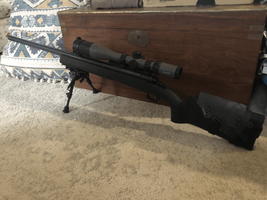